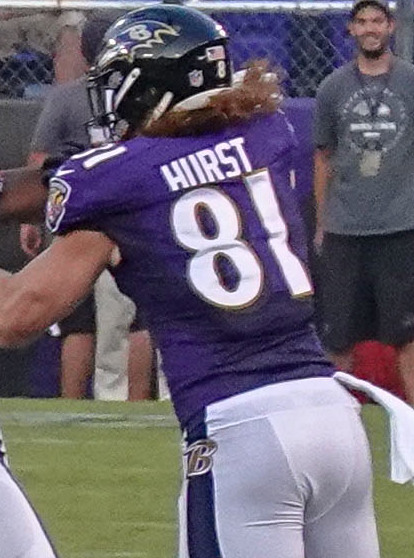 No one should be puzzled by the fact that Austin Hooper was not brought back to Atlanta before becoming the highest paid TE in the NFL for the Cleveland Browns (we’ll get to that later). More puzzling my be the trade to acquire Hayden Hurst from the Ravens for a second round pick with both teams swapping fourth round picks.  It might seem like a steal right now for Baltimore, but I am convinced that Hayden Hurst could be the final piece this offense needed to bring them back to the promise land.

For those that do not know, Hurst was the 25th pick in the 2018 NFL draft. Drafting right them, the Atlanta Falcons. They selected Calvin Ridley. Point to Atlanta for that call.  But there was a good reason why Hurst was that high of a draft pick.  At 6’5″ and 260 pounds, he has every bit of the size needed to succeed at one of the toughest positions in the NFL. He had great numbers coming out of South Carolina playing with some questionable quarterbacks.  He has the ability to block but is much more of a receiver than a blocker.  I was a huge proponent of him being drafted by Atlanta with the 26th pick , but Ozzie Newsome saw him as a top talent in that draft.

His time in Baltimore was mainly halted by two things, Lamar Jackson and Mark Andrews. Lamar Jackson was a well deserved MVP of the league this year, but the offense revolved more around how dynamic he could be in the running game than it did with his arm talent.  He ranked 26th in passing attempts, 27th in completions,  and 40th in average attempts per game.   Hurst, during this season saw 39 targets for 30 receptions and 349 yards over the 2019-2020 season.  During the same time, Mark Andrews was targeted 98 times with 64 receptions and 852 yards.  Andrews led the Ravens in receiving, Hurst was fifth.    Baltimore threw the ball on less than 46% of their total plays.  I could throw a hundred more stats at this wall but the overarching point to this rant is the Baltimore Ravens do not throw the ball enough to warrant two receiving threats at tight end.

Moving on to the former man in Atlanta for a minute, Austin Hooper was a guy that was either spectacular or non-existent.  He had 75 catches for 787 yards and 6 tds in 2019, but he was a product of low resources and high demand this off season. He is set to sign a deal with the Browns that will mean he will get paid more than guys like Travis Kelce and Zach Ertz. That’s money that the Falcons could not fathom competing with if they wanted to stay competitive in the NFC South. Letting Hooper go, in my opinion, is dodging a major bullet that could have come back to bite them year or two down the road. Now, they have a guy with 2 years left on his rookie deal that has a lot to prove.

Matt Ryan is at the end of his career and Julio Jones is not getting any younger.  Making this move for Hurst now is going to be a blessing in red hair, and have Atlanta fans glad they did not give Hooper the contract he received in Cleveland.  He is a reliable receiver ( 0 drops in his 2 year career) and has more straight line speed than Hooper did (4.62 40 to a 4.72 40). He is in an offense with a quarterback that had the most completions and the third most attempts in the league, and will find himself in single coverage more times than not with Julio Jones and Calvin Ridley on the outside.  It might have cost them a second round pick, but the Falcons now have the 25th and 26th pick from the 2018 NFL draft, and it only cost them a second.  All the fans that are thinking the Falcons got fleeced in this trade may want to hang around and watch the next two seasons.  Mark Andrews is a great tight end, but I think Hayden Hurst could be even better.

Everybody, feel free to leave any comments down below. Discussion is always welcome here and I love hearing others opinions, even if they do not agree with my point of view.