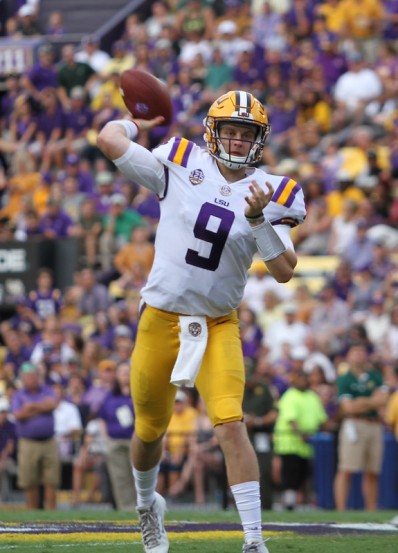 As much credit as we give the LSU Tigers for having one of the best factories for producing NFL talent, they have not produced a first round pick at quarterback since Jamarcus Russell in 2007. LSU also has not had a quarterback drafted before the sixth round since 2007. So how is a transfer student from Ohio State changing the landscape of LSU football and put himself in prime position to be the second Heisman trophy winner ever at LSU?

Joe Burrow waited patiently for his opportunity behind guys like JT Barrett and Cardale Jones for his opportunity to play for his home-state Buckeyes. After his redshirt sophomore season though, he realized Dwayne Haskins was going to receive the starting role at OSU and made the decision to transfer to LSU.  Being named the starter going into the 2018-2019 season, he had, what some would consider, a decent year with 2900 passing yards 16 touchdowns and 5 interceptions.  Nothing spectacular, but good enough to lead the Tigers to a date with UCF in the Fiesta Bowl and winning that game.  Still, when being compared to guys like Trevor Lawrence and Tua Tagovailoa, he was nothing spectacular.

In 2019, however, Burrow has been absolutely stunning.  LSU is averaging 385 passing yards a game with Burrow throwing for 2,484 yards and 29 touchdowns through the first 7 games of this season. More so, he is averaging an astounding 80% completion percentage, best in the NCAA.  To give that some perspective, the next guy on this list, Jack Coan from Wisconsin, is averaging 76% and has thrown 50 less passes.  His 29 touchdowns is tied for the NCAA lead with Anthony Gordon at Washington State who has thrown 140 more attempts than Burrow.  He is playing like a man who is well on his way to winning a Heisman, but he has had a little bit of help along the way.

The two Heisman favorites coming into this season were Tua and Trevor Lawrence.  Tua has had a spectacular season as well, but with an ankle sprain suffered against Tennessee, he will miss at least one game and could be at less than 100% when Alabama welcomes LSU to Bryant-Denny Stadium on November 2nd.  Lawrence, on the other hand, has had a shaky road to this point in the season.  Clemson is still 7-0 to begin the season, but Lawrence has only 14 touchdowns compared to 8 interceptions.

There have been others to attempt to climb the Heisman ladder with varying degrees of success.  Johnathan Taylor from Wisconsin started out hot, but does not seem to have the steam to carry a team completely reliant on him running for 200 yards a game.  A loss to Illinois almost certainly takes him out of contention.  Justin Fields from Ohio State is having a stellar campaign with 22 touchdowns to only one interception.  He may have a chance to make his way to New York for the Heisman trophy ceremony, but he has played a less than impressive schedule so long and his games left keep getting weaker with losses by Wisconsin and Michigan over the weekend.  Jalen Hurts is proving that any quarterback in Lincoln Riley’s offense can compete for a Heisman Trophy, but the only marque game Hurts seems to have left will be against a red hot Baylor team until the Big 12 championship.  The lack of competition could be his downfall.

Joe Burrow has had the best season of any LSU quarterback to ever do it and seems to be on his way to a Heisman trophy and a high pick in the 2020 NFL draft.  He waited for his opportunity to shine and he has seized the moment.  There is still plenty of football to be played, but don’t be shocked to see Burrow raising the hardware in New York come December.